The Movie Editor:
This is the central hub where the magic happens. The movie editor allows you to capture, preview and edit your movie. It consists of three main parts. The live preview, where you can see the current frame, the timeline and the the frame-by-frame editor. The frame-by-frame editor shows you all the images you took in chronological order. 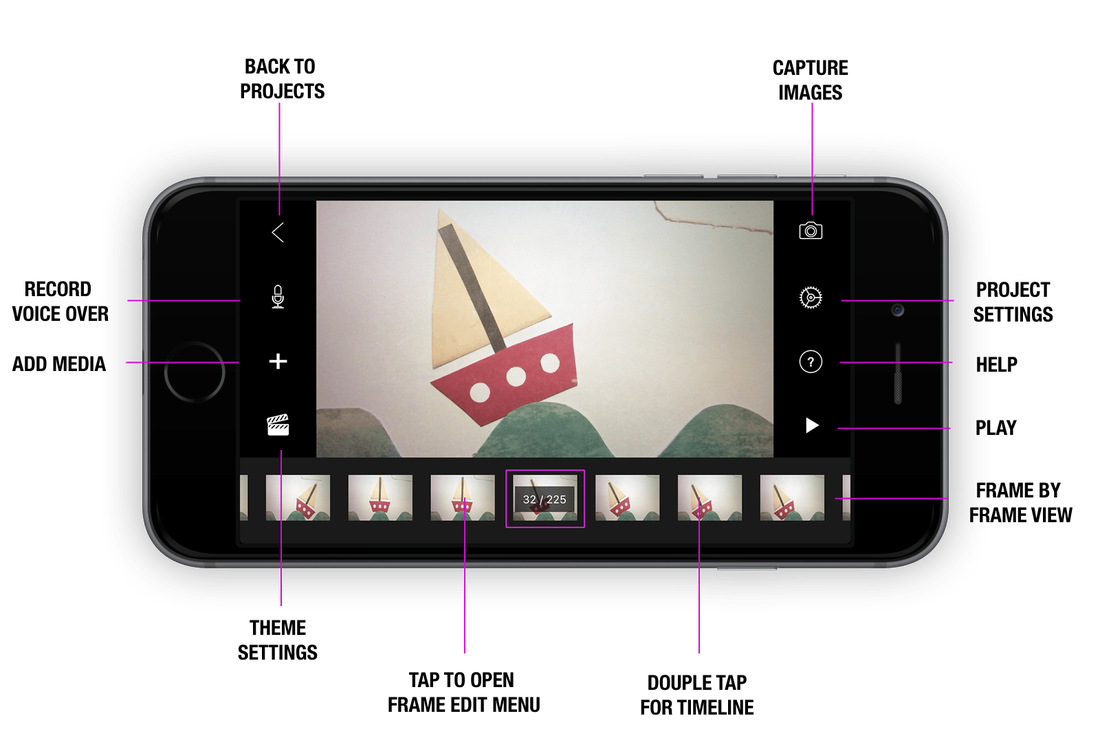 Project Settings:
In the project settings you can adjust the speed or change the way the movie preview is played.

Adjust the Speed of your Movie:
You can adjust the speed of your movie in the project settings. The speed is defined as frames per second or FPS. Keep in mind that the more photos you shoot, the smoother the video will be. A regular movie on TV contains about 25 frames for each second in the film. Start by using 6 frames for each second in your movie. If you feel your movie looks unsteady use 12 or more frames per second. Tip: If the scene doesn't contain movement you can make use of the pause feature to hold a frame for a given time.
​
The Frame-by-Frame Editor:
The unique frame-by-frame editor shows you all the images you took in chronological order, much like the single frames of a movie. Each frame is represented by a thumbnail image. You can scroll around to see all the images you’ve captured. Taping a thumbnail will open the frame edit menu to edit, copy and paste or delete the frame and more.

Frame Counter, Playhead, and Capture Frame:
Tip: You can move the capture frame to any position within your movie. For example, you would like to add more frames in the middle of your movie. Just open the frame edit menu and select Capture to insert the capture frame at the new position. All images you capture from now on will be added there.

Delete, Copy Paste, and More:
If you shot a frame you don’t like or one that jiggled, you can easily delete it. Or you want to copy and paste frames, add a text, paint on it. All of those options can be reached from the frame edit menu. 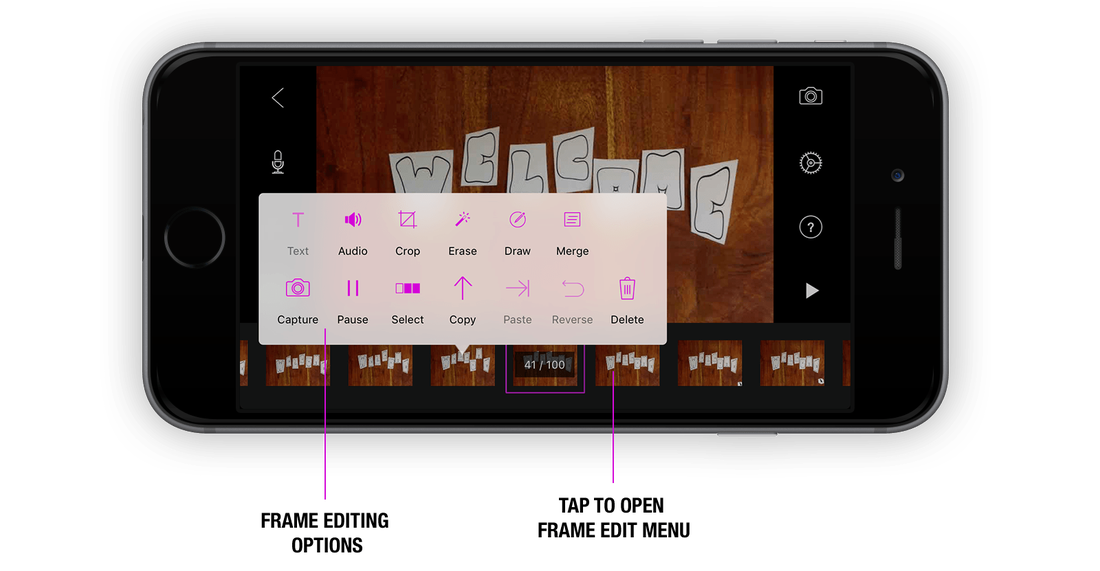 Hold or Pause a Frame:
Want a frame to be displayed for a few seconds? You can do so one of two ways: you can either capture the image several times in succession; or just choose the pause option. Pausing, also known as holding or freeze frame, is the same as copying and pasting the frame multiple times.Tip: If you mess up, you can change or adjust the image duration at any time. Just redo the steps.

Navigate in the Timeline:
Never get lost even if you take hundreds of pictures. Use the timeline to navigate to various sequences or frames in your movie. The timeline also visualizes the audio of your movie as a waveform. The shape and form of the waveform represents the music and audio clips added. A low waveform symbolizes a softer sound whereas a large spike symbolizes a louder tone. The waveform display also shows a little dot indicating the beginning of an audio clip. 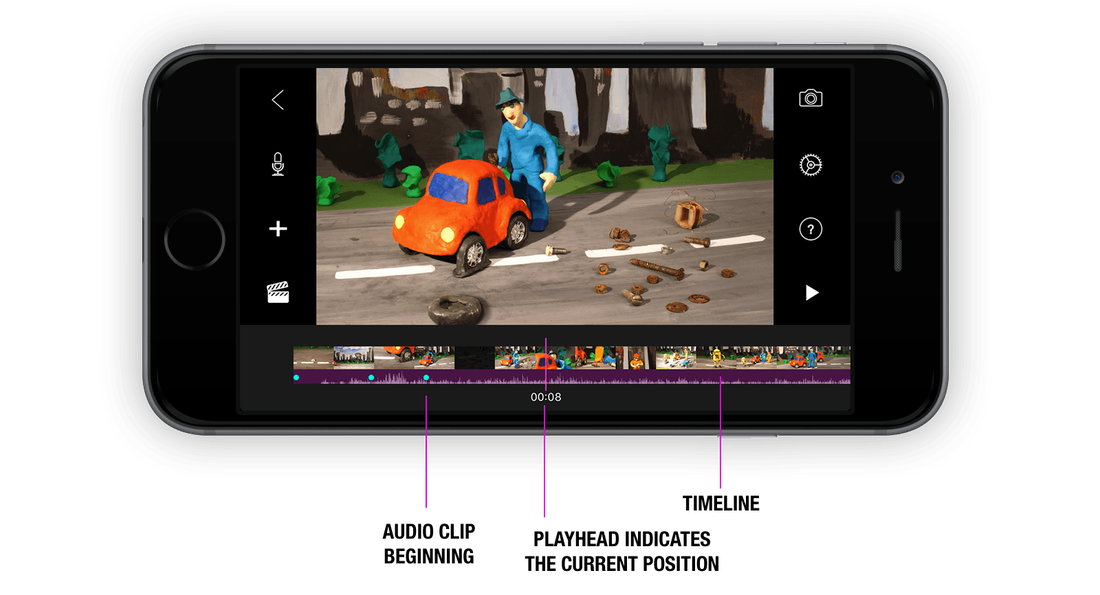 Zoom In or Out:
Zooming in lets you see more detail. Here you can see every single frame in your movie. Zooming out lets you see your entire movie at a time without much scrolling. This makes it easier to trim audio clips or scrub within the movie.
Scrub Video:
Scrubbing is another way to quickly preview your movie. When you scrub, you manually move backward and forward through the movie so that you can view the animation in detail. Audio is disabled during scrubbing.
Record Audio:
You can record audio, such as voiceovers, directly into your Stop Motion Studio project.After you record audio, it becomes available in the audio choosers Recordings tab.

Add Audio and Music:
Now it’s time for the finishing touches.Tip: Unfortunately some songs are protected by a digital rights management system (DRM). Those songs cannot be used and are therefore greyed out. 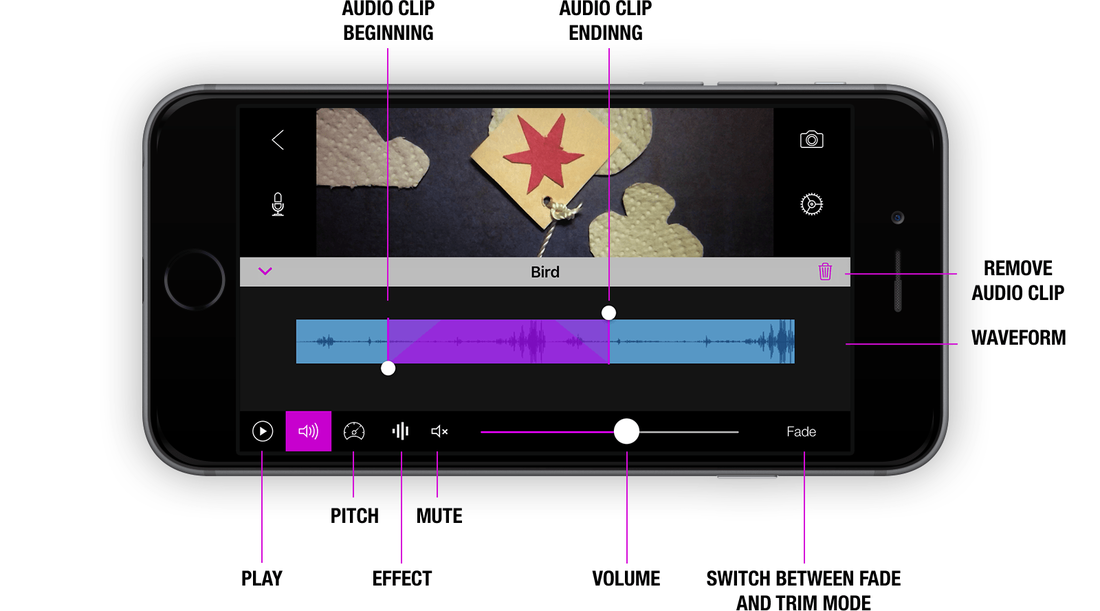